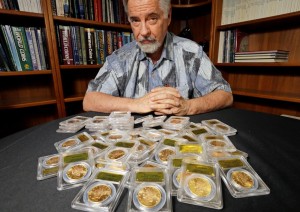 A husband and wife are reveling in their good fortune after finding $10 million in rare gold coins buried on their property in Northern California. The gold country discovery is thought to be the largest of its kind in U.S. history, according to David Hall, co-founder of Professional Coin Grading Service, which authenticated the find. It’s quite a story. People were walking along on their property in Northern California, noticed something, began digging and they found cans of gold coins, Hall said. It should have happened to you and me. The incredible find. The coins were unearthed in February 2013 by the husband and wife, who wish to remain anonymous.

They were walking their dog when they spotted something shiny on the ground. The couple dug and eventually discovered eight metal cans, containing more than 1,400 gold coins. No one knows how they got there, or whom the coins might have belonged to. Somebody could have buried them and then died before they let anybody know where they were, Hall said. Believe it or not, I know cases where they forgot they had something, or they moved or whatever … It could have been some kind of robbery deal … Who knows?

The treasure is known as the “Saddle Ridge Hoard” because it was discovered near a hill the couple called Saddle Ridge.Â In their effort to stay anonymous, the husband and wife aren’t saying exactly where the fortune was found. These coins could change history The coins, in $5, $10 and $20 denominations, date from 1847 to 1894. Most were minted in San Francisco. They have a combined face value of about $27,000, but experts believe they could fetch $10 million or more.Â Many are in pristine condition, including at least 14 coins that are considered the finest known for their date and mint mark.

A highlight from the hoard is an 1866-S No Motto Double Eagle, valued at close to $1 million.  The couple is planning to sell much of the collection. Approximately 90% of the coins will go up on Amazon.com’s “Collectibles” site, according to Don Kagin, of Kagin’s, Inc., who is assisting the anonymous owners. He told CNN the couple wants to donate some of the proceeds to charity. “Basically they’re thankful and they think it’s wonderful that they’re going to be able to save their property that they thought they might lose and, again, they want to give back to the community and to needy people,” he said.

Collectors wanting a sneak peek can see some of the coins at the American Numismatic Association’s 2014 National Money Show in Atlanta, which opens Thble Eagle Rare Gold Coins $20 Morgan Double Eagles $10 Gold $5 Goldursday. “Unlike other hoards and treasures, this one includes a great variety of coins struck over many different years, and many of the coins are still in pristine condition,” Kagin said. “And add to that a wonderful human interest story: this family literally found the pot of gold at the end of the rainbow.”