| Send to a friend | Add to your watch list 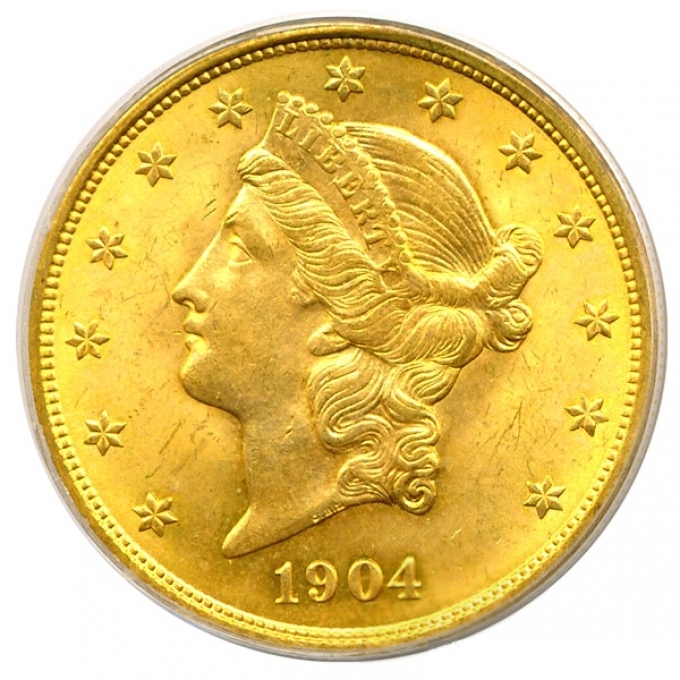 1904 $20 Liberty.  MS-64. The most common Type III double eagle. While there is always a large number of 1904 double eagles to choose from, viewers of this coin will agree that its condition is fantastic and unusual. Any gem double eagle is rare and desirable and this example is very, very close to gem status. There is pleasing cameo contrast between the super frosty devices and microgranular surfaces. The luster is outrageously attractive and the color is an enchanting rich yellow gold.

Several years prior, in 1928, the stock market collapsed ushering in the era known as The Great Depression. Business slowed to a crawl and many people became homeless. People then began to doubt the banking system and many banks collapsed, leaving account holders with nothing. With a legitimate fear of bank failure, people started to panic and withdraw their money in gold coins. Since banks did not normally hold enough gold reserves, many of them failed. This threatened the entire banking system, a collapse of which would result in even more dire economic circumstances.  In an effort to avert this impending catastrophe, President Roosevelt terminated the gold standard and made the possession of gold by U.S. citizens illegal. Money could still be withdrawn from banks, but only in the form of paper currency.
During their production run, one ofthe primary uses for these gold coins was as bank reserves. To achieve this purpose,millions of Type III Liberty Double Eagles were shipped overseas in the late 19th and early 20th centuries. When President Roosevelt suspended gold coin production in 1933, Americans were required to turn in their gold at face value for melting. Many Americans resisted the notion of turning in their gold coins to the Federal Government. As a direct result, an
enormous number of Double Eagles began to flow out of the country. This proved to be fortunate for numismatic collectors as foreign hoards became the source for Type III rarities that would otherwise have been destroyed.The only gold that could be legally held by U.S. citizens was gold that had numismatic or collectible value.  This legislation was enacted to avert gold currency hoarding